Before we go into the details of Lara Croft Temples and Tombs, we feel that some context is in order. Lara Croft: Tomb Raider was first released as a video game way back in 1996 by Eidos Interactive for personal computers, Sega and Sony Playstation.

The action-adventure has since become a media franchise, spawning sequels and Hollywood film adaptations which fed an insatiable appetite for fans all across the world.

The game follows the heroine Lara Croft, a relic hunter, on her adventures to the four corners of the earth. With noble pedigree, she represents a strong female character, considered the equivalent to an Indiana Jones-type male protagonist.

Microgaming releases three iterations of the branded slot, and we'll introduce you to the prequels briefly.

With the success of this iconic character, it was only a matter of time before a slot developer would create a branded slot centred around the female lead. And so in October 2004, Microgaming rose to the challenge to produce Lara Croft Tomb Raider slot. It marked the debut of the slot franchise, taking shape in a 5 x 3 (reels x rows) grid playing area with 15 paylines. It featured wilds, scatter wins, re-triggerable free spins with 3x win multipliers and the Tomb Bonus which is a Pick & Click Feature where you can win up to 1,000x bet/payline.

It wasn't until March 2008 that Lara Croft would make her slot return in Microgaming's Tomb Raider Secret of the Sword. As with its predecessor, it had a 5 x 3 (reels x rows) playing area, but this time played on 1-30 variable paylines. It added a soundtrack and mildly animated sequences which were glaringly absent from the original.

The artwork has a slight edge over the original. As with the original, it features a wild and a scatter wins symbol. There is also a free spins mode with Rolling ReelsTM. The Rolling ReelsTM was an improvement which causes winnings symbols to dissolve. It results in gaps that are then occupied by new symbols which can lead to a new win. A round does not end until you fail to create a new win. For each roll, a multiplier, starting at 1, increases by 1x until it reaches 5x. Unlike the original slot, free spins cannot be re-triggered.

Gone is the Tomb Bonus of the original, replaced by a new one called the Global Adventure Bonus where you can win up to 450x weight average bet. Your objective is to locate hidden sword fragments, but you choose a site. Each site is protected by booby traps, that you'll want to avoid as two will end the adventure and send you packing. If you do manage to avoid certain death, then there's the Hidden Treasure Bonus where you can win up to 70x weighted average bet. Win 2x multipliers, a bonus prize, all location wins or Shootout Bonus entry.

Finally, we get to the latest and arguably greatest May 2019 sequel called Lara Croft Temples and Tombs. Triple Edge Studios produced the third instalment for Microgaming. It has a 5 x 3 grid, like the others, only this time with 243 ways to win. The game has a maximum payout of 5,000x bet and features that include wilds, a Jackpot wheel, and Rolling ReelsTM with a multiplier trail in the base game and free spins.

In this latest adventure, Lara finds herself on a hunt for ancient Egyptian treasure within a dark temple. The artwork has improved, with more colours. The top-four paying symbols feature action poses of Lara, the golden crocodile head of the god Sobek and jackal-headed Anubis. The boring royal flush symbols of the first two slots are replaced by more thematic: water canister, torch, backpack and rope with hook, symbols. The soundtrack has improved once again, creating anticipation. The sound effects are more powerful, and you may even hear Lara Croft voiceovers.

The wild symbol is a golden scarab marking that appears on reels 2, 3 and 4, so it cannot create its own winning payline. It contrasts with the first two slots where it appears on every reel and has an exclusive payline payout. It can however substitute for all symbols including the scatter.

Lara Croft's diary is a scatter symbol that appears on any reel. It does not provide scatter wins, since it doesn't reward a payout. 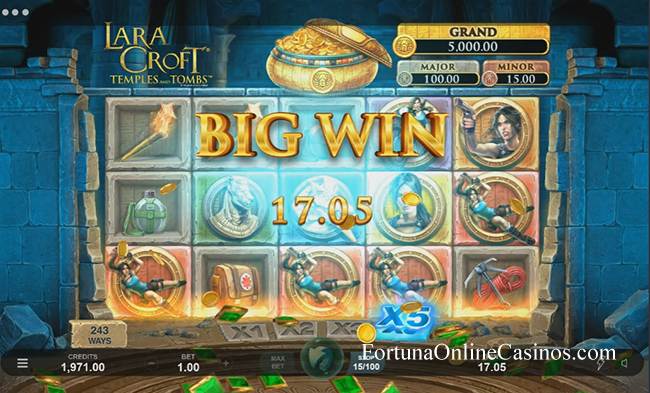 We saw the Rolling ReelsTM feature introduced in the second slot Tomb Raider Secret of the Sword. In that slot, it was only available in free spins mode. In this slot, it is available in both free spins and the base game. Winning symbols are removed from the playing area, and new symbols fall to fill in the spaces. These 'rolls' continue if new combinations are created. On the 1st, 2nd and 3rd+ roll, there's a base game multiplier trail of 2x, 3x and 5x, respectively. It resets to 1x when the round ends.

Collect 8 free spins on each way that you trigger the free spins for up to 32. On the 1st, 2nd and 3rd+ roll, there's a free spins multiplier trail of 3x, 6x, 9x and 15x, respectively. Free spins are triggered by 3+ scatters, and wilds can help with that.

The Jackpot feature can trigger by collecting wilds during the Rolling ReelsTM. The more that you collect, the better your chance to unlock it. In this feature, one of three jackpots is awarded: Minor, Major or Grand. 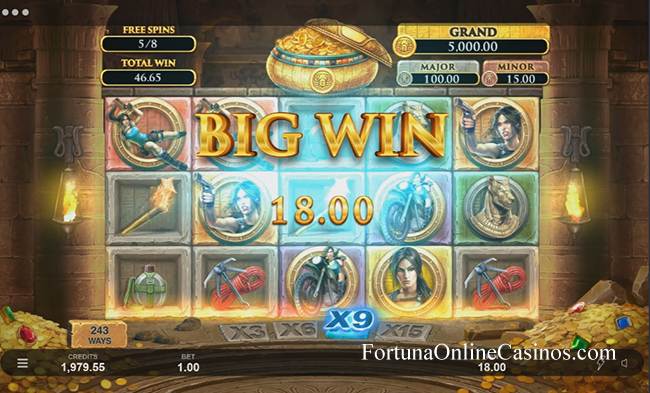 The slot has a high variance with a return to player (RTP) of 96.05%. It's more suited for players with higher risk tolerance and a bigger bankroll.

It is the third kick at the can for Microgaming, allowing them to refine the game further. We did like the free spins feature which we found triggered often enough to make it more enjoyable. The trailing multiplier was a helpful add-on. The Jackpot feature was not as hard as you might think to trigger, although we never did manage to win more than 15x bet.

We also liked how the slot has evolved from a 15 paylines slot to 243 ways to win. While this high volatility game doesn't have the same punch as the progressive jackpot Microgaming slot Mega Moolah, it's worth checking out! 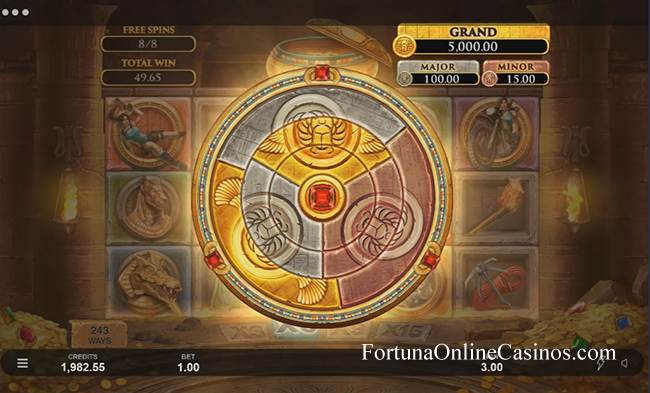